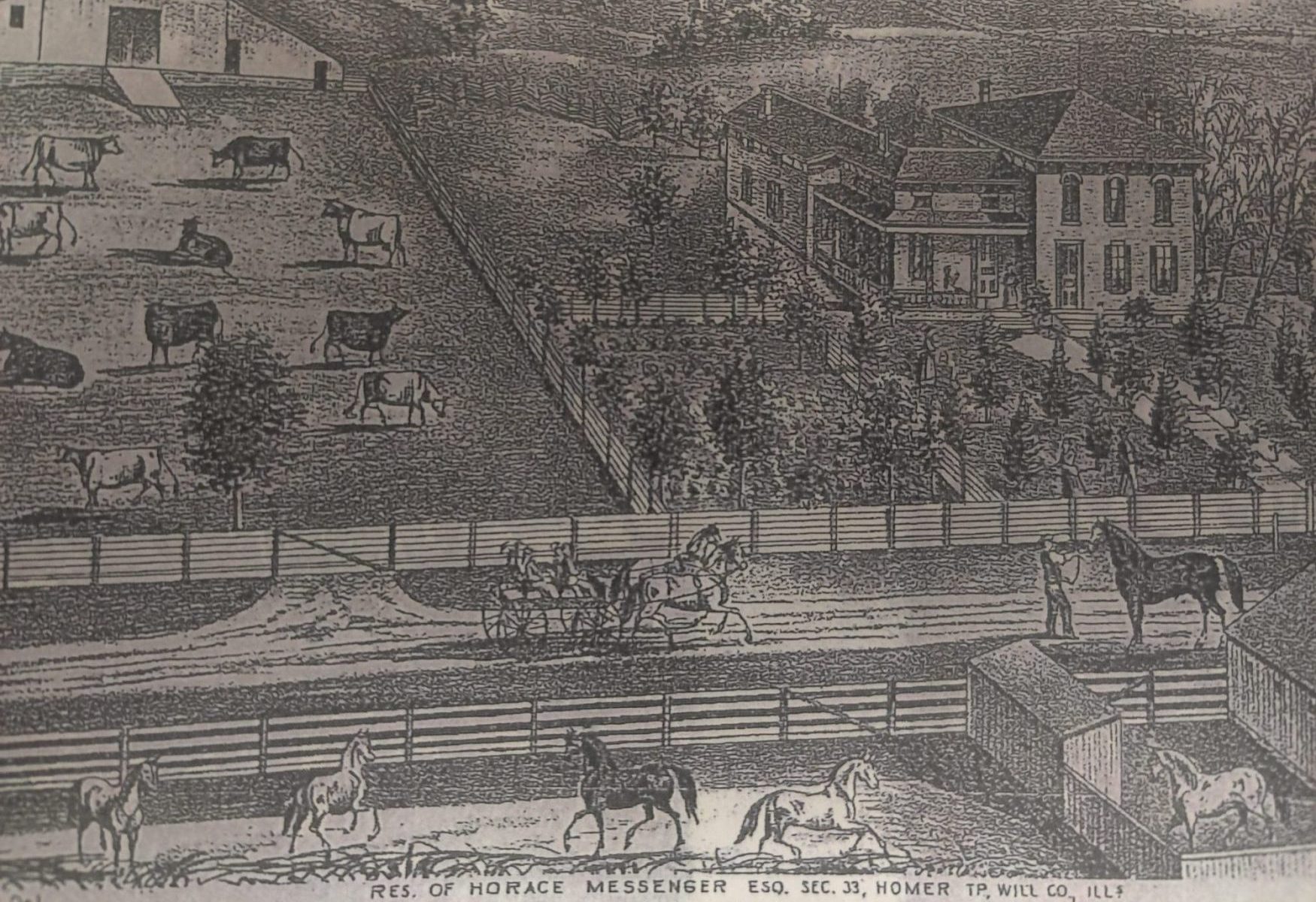 Homer Township has emerged as one of the most desired suburbs in Chicagoland and is an exceptional place to live, work, and raise a family. Homer Township features a small-town ambience with plenty of open space, historical amenities, friendly neighborhoods, numerous civic organizations, low crime and responsive emergency services. There is easy access to a wide array of shopping and recreational activities and the community is endowed with ample cultural resources including several parks, excellent schools, delicious restaurants, a public library and exciting community events.  Located in Will County Illinois, as of the 2010 census, its population was 39,059 and it contained 13,418 housing units. Homer Township is located between Orland Park, and the historic cities of Lemont and Lockport. It includes areas in Homer Glen, Lockport, Lemont and Mokena. Conveniently located with easy access to route 83 and interstates 355 and 55, it is easy to travel to and peaceful to visit. With many parks, golf courses and many beautiful wooded settings Homer Township is a great place to visit and an even better place to live.

Township government is one of the oldest forms of government in Illinois. Townships perform three mandatory functions: administering a general assistance program to qualifying residents, maintaining Township Road District highways and bridges and appraising property values. Townships also are given a variety of optional statutory abilities which are somewhat lesser known, but equally important. For example, they may among other service, provide senior services, conduct programs, maintain public properties etc. Townships are conferred their powers through the Illinois Township Code (60 ILCS 1/1-1), the Illinois Constitution and various other statutory and common laws. They have been authorized various powers that they may exercise depending upon the needs of their constituents, funding abilities and the engagement of their officials. Like other non-home rule units, Townships have no inherent powers, but only those granted to them by the constitution or authorized by statute.

YANKEE SETTLEMENT: Homer Township was named by Alanson Granger in honor of his native home, Homer New York. A True Yankee name from an old Yankee Settlement. Homer had the distinction of being an entire township so designated — should a traveler for many miles around ask directions to the Yankee Settlement he would usually find his way to Homer Township.

FRONTIER SCENES: Homer was one of the first Will County Township to be settled, due to its excellent stand of timber. The early pioneers moved into timber areas, clearing the land for farms and using the timber for building houses, barns, and fences. Homer’s land was rolling enough to provide good drainage, yet not hilly enough to encourage excessive erosion of the rich topsoil.

Letters written back to love one remaining in the east told of going to sleep at night to the serenade of howling wolves. Small herds of deer wandered into the settled areas, rummaging through the woodpiles and sheds in hopes of finding something to eat. Flocks of wild geese, turkeys, and prairie chickens were common sights. They often visited the barnyards, grubbing in the dirt for food the farmers’ chickens might have missed. As letters stated, this was truly a land of plenty, a land that God had furnished for anyone willing to work to earn a living from it. The soil, sun, and rain were provided, and the farmer produced the results by the sweat of his brow and his loving care of the land.

Not all of the frontier scenes were peaceful. One new and terrifying phenomenon was experienced by newcomer who had prairie land. Vast grass fires, set by man or by nature, roared across the country, lighting the night skies, and filling the hearts of both man and beast with fear. Haven could be sought in a stream or pond or cleared area, but panic often drove men and animals to flee blindly and they were overtaken and devoured by the raging fire. Survival on the frontier was difficult, but those who did survive left a rich heritage for many other people.

THE WINTER OF 1830-1831: Started the trickle of what was to become a swollen river of settlers filtering into the “promised land” in 1830. Mr. Joseph Johnson from Ohio arrived in Homer Township in the fall of that year, along with his two sons, Alfred and James Johnson. It was too late in the year for building a cabin, so they spent the winter in a sod and timber dwelling, as did most of the early settlers (For the pioneers, getting a crop planted was the first importance, building permanent cabins could wait). The winter of 1830-31 was recorded in numerous sources as a year of record snowfall, four feet deep on level ground, with deeper drifts making travel almost impossible, and covering the ground until late spring thaw. A round trip to Chicago for essentials such as flour was a momentous journey requiring two or more days. Farm animals suffered most as the supply of grain and hay was cut off, and some fine breeding stock ended up on the dinner tables. Many events are referred to in relation to the great snow of 1830-31.”

Joseph, Alfred and James Johnson were some of the first settlers, along with James Richey. Richey came to the Homer wilderness alone in 1830 and staked a claim in section 9. In the fall he went back to Ohio, thus missing the terrible suffering of the big snow in Illinois. He returned to Homer Township in 1831, bringing his family from Ohio. He remained on this farm until his death on October 15, 1888. Joseph Johnson and James Richey led the flood of “sodbusters:, people with the yearning for new land, and soon all the land in Homer was claimed.

THE BLACKHAWK WAR: These first settlers, Joseph, Alfred, and James Johnson and James Richey were soon called upon to serve their country during the Blackhawk War of 1832. All are found on rolls of Captain holder Sisson’s company. These men didn’t participate in any battles with the red men, but they walked many miles on scouting missions no doubt these expeditions were filled with tensions, for they didn’t know wether or not the Indians were going to attack. It was necessary for them to remain alert and ready for combat at all times. After a few months the war scare was over and the company was disbanded. Richey and the Johnson’s returned home to continue their work of setting a wilderness.

Deacon Asa Lanfear, from Cayuga Country, New York built the first home of sawed lumber in 1835. He remained on his original claim until his death in 1871. Other early settlers on the hill were Alanson Granger, Cyrus Cross, Levi Savage, Reuben Beach, Nathan Hopkins, Samuel Anderson, Horace Messenger, and John Ross.

In 1835 the first school house, the first store and a blacksmith shop in the township were built in Hadley. Norman Hawley operated the first store, which was the center of activity for the growing community. Merchandise for Hawley’s store was hauled from Chicago by ox teams the only possible means of travel over the rough trails of the day.

When the railroads were laid out a few decades later, they failed to come near the Village of Hadley. People begun moving to be nearer the railroads and the community disappeared.

Little did the residents of Homer Township realize that history of great importance to the agricultural world was being made in a blacksmith shop on the north edge of town. Farmers kept asking John Lane the blacksmith, if he could improve on the old wooden plows they had brought from eastern states. These wooden plows were inadequate for the thick Midwestern sod. Much time was wasted stopping the oxen time and time again in order to clean the sod from the plowshares. Lane spent much time experimenting with flexible steel, obtained from Col. Sayer’s saw mill in the from of old worn out saw blades. After trying many different sizes and shapes, a successful design was achieved. John Griswold of Lockport mounted a steel blade on a wooden frame and the product was ready for use in the fields.

Comstock Hanford of Homer Township was the first farmer to use the new steel plow. It is said that during the first plowing of the virgin prairie, from five to eight oxen were required to furnish the necessary power to thrust the steel-bladed plow through the thick sod.

John Lane moved his plow manufacturing business to Lockport. There was no suitable steel being made in the United States, and it was necessary to have steel shipped from Germany. In the 1850’s Lane formed a partnership with Jasper D. Loomer. The plows were advertised as “Lane’s Cast Steel plows”, “Lockport’s Clippers”, and “Sod Breakers”. Eventually steel of sufficient strength and flexibility for the plows was manufactured in the United States, and Lane purchased steel from Prime and Kimberly, Chicago hardware dealers. It was hauled to Lockport by ox team. Lockport was coming into prominence as a center of commerce and the steel plow was there in the main stream of traffic for farmers to see and to order.

John Lane also invented a drain plow with a large pointed bulb shaped blade. This formed a tunnel several feet underground to carry away excess water. This worked well for a time, but the tunnels soon filled up with soil. Clay tile eventually solved the drainage problem.

Lane did not patent his invention, being satisfied to share them with his friends of the soil. Another manufacturer of steel plows did get a patent and grew into a large well-known farm implement company. It exists today, claiming to have made the first steel plow. The Centennial Committee of Homer Township attempted to set the record straight in 1911 when they placed a marker at the northeast corner of Gougar Road and 7th Street. The marker reads: “In memory of John Lane who made the first steel plow in 1833 on this farm.” Lane’s invention made possible the settling of the prairie.